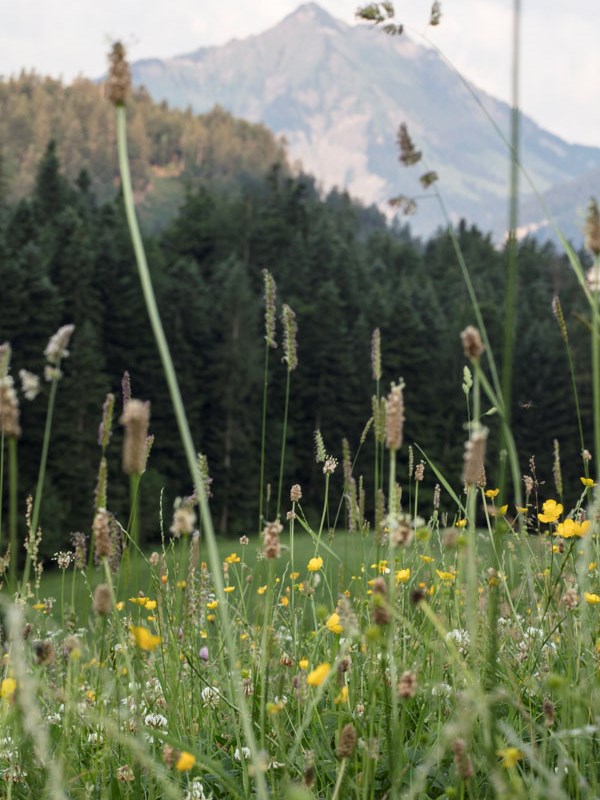 In the Bregenzerwald, we attach great importance to traditional milk production, to what we call the hay milk industry. But what is it all about?

What is hay milk?

Hay milk production is the earliest form of milk production. Hay milk cows spend their summer in the pastures and only eat fresh grass and herbs. In the winter, cows receive high-quality feeds: sun-dried hay.

What makes hay milk so special?

Hay milk farmers make a considerable contribution to the protection of the environment and the preservation of biodiversity because they cultivate their meadows, pastures and mountain pastures very carefully and traditionally.
Hay milk farmers allow their pastures to mature properly and thus make one or two cuts less per season than conventional farmers. They only mow their pastures once they contain a variety of different herbs and grasses in full bloom and biodiversity is the highest. This also provides many other species with feeding space, such as bees, butterflies, etc.

Hay milk as an ingredient for cheese

By consequently foregoing fermented fodder, cheese made from hay milk can be produced without the addition of preservatives and going through intensive mechanical processes. The quality of milk is also especially important for more mature cheese. Cheese suitable for longer maturation can only be produced from high-quality ingredients. Hay milk possesses that property and is therefore an ideal ingredient for cheese specialities.

Hay milk in the Bregenzerwald

The Bregenzerwald is a traditionally “silage-free” region and one of the largest closed areas which does not use silage feeding and therefore is suitable for producing hay milk. Furthermore, as a logical consequence of sustainable economy, GMO-free production was implemented in all steps of production from fertilisation, plant protection, feeding up to processing and maturation. All products manufactured by the cooperative are labelled “GMO-free”. This is controlled and confirmed by the independent inspection body AgroVet GmbH.

When you visit Hotel Post Bezau, you can taste delicious local cheese and yoghurt made from hay milk.

How to find your ideal retreat